Sculpture: Made by Hand 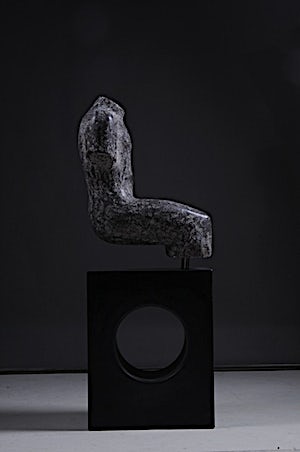 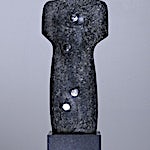 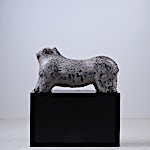 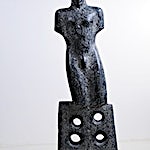 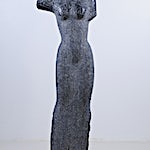 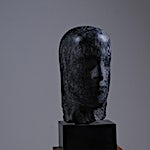 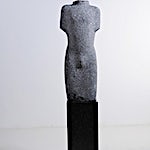 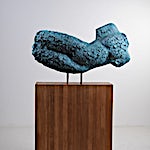 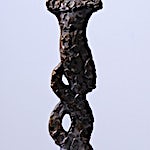 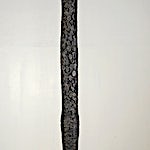 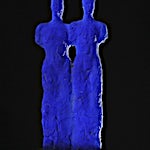 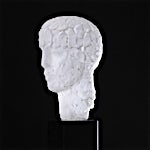 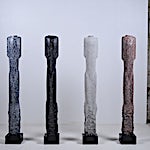 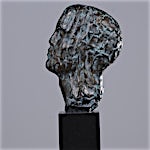 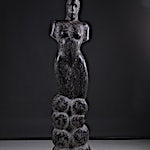 For the amateur psychologist, analysing the contrasting oeuvres of the Widerbergs must be almost irresistible. Frans, the father, is arguably Norways leading figurative painter and one of such fertile imagination that he most closely resembles Shakespeares Prospero, presiding over a magical world which he peoples with harpies, winged horses, phantasms from Nordic sagas, echoes of the Erl King, trespassers from Goyas nightmares or biblical episodes reminiscent of Blakes. His avatars, however, exist in a contingent time, one which is neither past, present nor future. The two figures which resemble Adam and Eve, for example, seem all the more vulnerable in a light which is blindingly post nuclear: their elemental drama is more apocalyptic than genetic. Again, the brushwork of these astral visions is turbulent, Dionysian.

Compared with that, the petrified beings created by his son Nico, particularly seen en masse when installed in his Oslo studio, seem to emanate Apollonian calmness and gravity. All of which might persuade casual Freudians that this is a classic case of a son rebelling against his father by operating in a different genre and sensibility. They would be wrong. Nicolaus Widerbergs professional admiration and filial affection for his father is unconditional. Furthermore, despite their differences of method, there are certain characteristics that they share. The most obvious, perhaps, is of their artistic independence. At the time when Frans Widerberg was stubbornly insisting upon his freedom to create a mythopoeic world, the conventionally acceptable idiom was of course gestural abstraction. Nico too, showed great fortitude in developing his own version of neo-classicism at a time when Artworld groupthink manifestly favoured the improvisatory tableaux of installation and the look, no hands of conceptualism.

Throughout his career, the material qualities of his sculpture have been an essential resource. Indeed, when he talks about carving and travelling into the stone he is not indulging in empty rhetoric but is describing a vital process. When he travelled to the Carrara marble quarries in the early 80s he encountered Italian masons who, wearing hats made from newspapers which declared their political allegiances, could recognise stone from its smell when cut. They also knew the veins, the internal cracks which could be exploited in splitting and shaping it. Needless to say, these were skills which he quickly assimilated.

My goal is to produce strength, communicate energy, he said. There is something fascinating about creating something living out of an inanimate material. I try to give life to something dead, which comes to life  its a sort of cycle.

What the unresponsive fail to perceive therefore is that while favouring a (modified) classical language he creates beings in a state of suspended animation; hence their timelessness. As in fairy tales, if you kissed them they would wake, breathe, move and talk. One of the paradoxes of these pieces is that they are a symbiosis of sensuous human presence and pure, abstract form. Their powerful sense of humanity persists even though these figures are decapitated, truncated and lack arms. One of the sculptural reasons for this, Nico points out, is not that it is an attempt to mimic Hellenistic conventions, but rather that the possibility of concentrating upon the torso without the need for complex undercutting gives him greater expressive freedom. That reference to the cyclical nature of his activity emphasises its intrinsically transformative role but it is also accompanied by a vision which is essentially abstract: almost everything is seen through the lens of abstraction.

Widerbergs synthesis of chaste geometries and sensuous forms recurs throughout his oeuvre and in different idioms. His habitual subjects include heads, busts, torsos, pillar figures and occasionally animals, all of which are realised in inherently expressive materials, often in combination. His bronzes, for instance, have something of that instantaneous mutability of clay which was so typical of Rodin, another of his heroes. It enables the torsos to yearn for movement even when they are cast. As time has passed, however, he has come to prefer carving. The more intractably resistant it is, the more he enjoys the challenge. Carving is an essential part of the abstract language that he articulates so that traces of the chisel and hammer coexist with polished or faceted areas which interact with exposed, rough and abraded surfaces. This concern with materials even includes plinths. In a sense they cease to be plinths becoming instead an integral part of the sculpture. They transcend mere presentation, a diabase plinth, for instance, acting as a perfect foil for, say, a bronze torso: abstract cube counters soft anatomy. The torsos particularly are rooted to the plinths or are deftly suspended above them: poise and equilibrium are distinctively crucial features of this series. Its interesting too that in his studio they can be seen in their inchoate state as rough blocks of granite with rudimentary chalk drawing on them. Evidently they are visualised holistically as vertical works while remaining horizontal when being carved.

As the foregoing suggests, Widerbergs pragmatism is undeniable but, to repeat a truism, art begets art, and Nicos enthusiasm for the work of Marino Marini, Mimmo Paladino, Henry Moore, Ipoustequy, Rodin and Giacometti has patently affected his own. Two of these heroes, Giacometti and Paladino, are particularly significant. Nicos pillar figures inevitably invite comparisons with Giacomettis existential sentinels, those etiolated figures which appear to have been eroded by the space which surrounds them. Nicos figures with their elementally shrunken arms and illogically bulging legs are charged, nonetheless, with an energy that fills the room, as one of his patrons once remarked.

Paladino, however, is a more powerful influence. Nico had first become aware of him during his stay at Pietrasanta (Carrara) in 1984. There was also a major Paladino show at the Oslo Kunstnernes Hus the following year which enormously impressed the ambitious 24 year-old. To encounter work which at one level was like the material embodiment of Italo Calvinos sublime fantasies must have been hugely refreshing after the constraints of pure abstraction. Paladino had reintroduced myth, narrative and extraordinary surrealistic invention into sculpture, qualities reinforced by radical changes of scale and daring combinations of materials.

. Today, many artists riding the tiger of an accommodation with the values of media and celebrity culture, favour the tactics of shock, confrontation and transgression, their ultimate purpose ostensibly being catharsis. Like the Buddhists, Nicolaus Widerberg, ever the nonconformist, surveys the world unflinchingly and opts for meditation, healing and redemption.
© William Varley