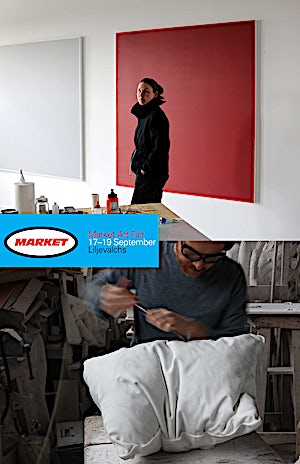 KRISTIN NORDHØY
Kristin Nordhøy begins her paintings by affixing strips of masking tape to monochrome canvases and wall surfaces and her drawings by tracing invisible lines on sheets of paper. Depending on the medium, she then either paints between the lines, removes the tape, and incorporates curved and non-parallel lines of different colours or renders the indiscernible visible by overlaying her lines with pastel and charcoal. In Nordhøys drawings, which call to mind the work of Surrealist artist Max Ernst, minimalist artist Agnes Martin, and Op artist Bridget Riley through their technical and formal aspects as well as visual effects, the lines create a spatiality, giving this traditionally two-dimensional medium an unexpected sense of depth. Placed perpendicular and at varying angles to one another, these lines also, as do those in her canvas and site-specific wall paintings, form chessboard and moiré patterns. At times resembling tangential grain on a section of exposed wood or ripples moving along on the surface of water, these motifs create an optical illusion that forces the human eye to see multiple layers or to move continuously in search of a single point of reference; the former frequently occurs while viewing her grid drawings and transparent paintings, while the latter takes place when examining her drawings with curved lines and Interference paintings.
Kristin Nordhøy was born in Oslo in 1977. She received her MA in Visual Arts at the Oslo National Academy in 2006 and has since showed her work in exhibitions throughout Europe.

HÅKON ANTON FAGERÅS
Håkon Anton Fagerås works figuratively and exclusively in everyday themes, portraying individuals, men and women alike at various stages of life. His intention is to hone in on details in order to capture a mood of poetic eloquence. The artist shows us fleeting moments of beauty in everyday life. While Renaissance sculptures were often situated on plinths soaring above the viewer, Fagerås individuals are placed positioned on equal level with the audience. This approach reinforces the idea of the figures as reflections of our own time.
Håkon Anton Fagerås (b. 1975, Bø i Telemark) resides in Oslo, dividing his time between his studio in Eiksmarka and his studio in Pietrasanta, Italy. Fagerås visited Pietrasanta on his own initiative for the first time seventeen years ago while an art student at the National Academy of Fine Arts in Oslo where he graduated in 2001. In 1995, prior to attending the Academy of Fine Arts, he studied at the Norwegian National Academy of Craft and Art Industry under the painter Jan V. Sæther.