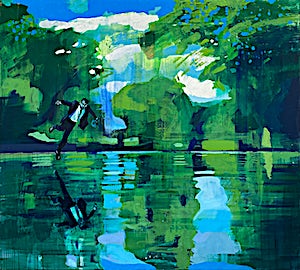 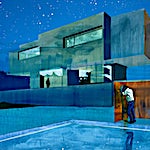 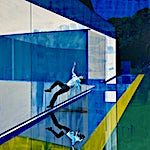 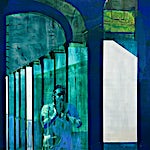 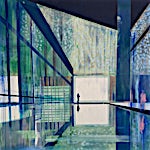 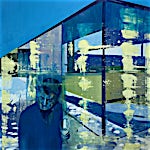 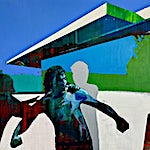 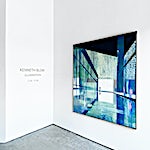 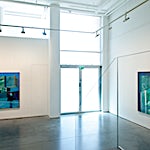 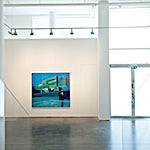 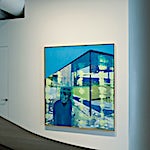 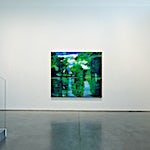 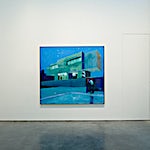 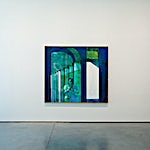 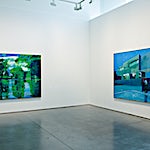 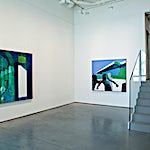 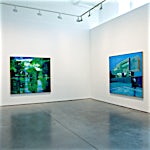 Watching Blom working on his paintings in his studio, you immediately notice the serene, concentrated atmosphere charging the room with suspense. One has to remark on this solitude because it is, so to speak, the prerequisite for creating these infinitely intense images. One could say that the images all but jump out at you with their impact. They could almost be stills taken from a movie. The existential presence of the human body; it's often imbalanced posture; its blurred facial features - all are rendered with accuracy and placed in a composition of misleading lightness that masks a painterly technique perfected over years.
The images open surprising avenues of thought, offering what only truly great painting can: a space deep down inside the image for the viewers gaze to develop freely.

In retrospect, Blom showed an early tendency to let his various interests overlap. We can speak of an almost simultaneous process in which an interest
in art history blended with his fascination for film and architecture. Added to the mix are
a boundless curiosity regarding the use of colour and perspective and a dedication to explore the very limits of what can be visually represented. This holistic approach was already apparent during his studies at the academy and was fostered to no small degree by his professor Arvid Petersen, who produced a number of remarkable students.

Stylistically, the virtuose play among the omnipresent cold and smooth modernism of architecture and its mirror-like glass surfaces is a strong feature of Bloms paintings. Blom moves freely across surfaces, using reflections in the glass to spread a cold light over the entire image. He plays with associations with the light concept of Versailles hall of mirrors, only to succumb a moment later to modern trends. More than a few of Bloms staged images leave the central figure so lost in the surrounding space that associations with Kolbes female nude Der Morgen standing in front of Mies van der Rohes Barcelona Pavilion are inescapable. The fragility of emerging bodies is further underlined by the minimalist chic of Bloms architectural structures.

It is no coincidence that everything is reminiscent of a films freeze frame, of moments caught in the flow of time. We dont have to look far to find convincing examples from film history - Hitchcocks indulged agoraphobia in the 1959 film North by Northwest is an obvious example - Cary Grant lost in a surrounding landscape or the architectural backdrop of the Villa Vandamm. Another outstanding example of a new aesthetic is the slightly later film Last Year at Mariendbad by Saha Vierny. Indeed, Bloms paintings are as charged with atmosphere as these films and create a strange tension that is difficult to escape. A significant part of this effect is the placement of the subject within the picture. Our view of the body is always a view of an unfocused psychological profile as well, reflecting cold, distance and a bottomless void. Basically, the point is a dissolution of the image, a trick Blom has mastered to perfection. Seemingly, a timeless continuum is created by reflections in glass and water, giving the carefully placed, solitary figures the appearance of floating. A mere painterly suggestion of a figure is sufficient for Blom - he outlines them with virtuosity. This can be seen as an elegant grounding in art history, an echo of Francis Bacons moments in time featuring human bodies blurred onto the canvas with a rag.

What remains above all is the immense precision with which Blom fixes his subjects in their surroundings. It is striking how the equilibrium of the bodies is often represented in a state of dissolution. Many bodies are fixed in the painting while stumbling, falling or staggering. This trick constantly encourages the viewer - who, after all, ultimately creates the image - to mentally continue the dramatic action.

Philosophically, Blom aims for timelessness in his paintings. He creates a sort of painted stasis with time presented as an unreal and extended state. We could say that Blom places hints of time in his images. It comes down to a calculated and constructed attack on the eye and the viewers emotional world. Architecture, nature and the human body are all visual foils for the excessive atmosphere inherent in the paintings. An instinctual mood prevails, a sort of emotional temperature usually only created by film. This comes in no small part from an ambivalence in the act of seeing: the premier regard, the first glance at a picture, suggests a scene presented in a naturalistically painted manner. But it soon becomes clear that the paintings are locked to us. Bloom offers an arsenal of sophisticated painterly techniques to then reveal to us the essence of the image. Where we at first saw the realistic Beton Brut of architecture, abstract strokes and transparent dabs or fields of paint intrude, disturbing our view. Blom indulges his joy in these moments of abstraction, delivering at times a painterly ecstasy that is almost a painting within the painting. In those moments, all reflections and mirror effects of the large windows and pools crest in a singular, cold symphony, a mood that settles over the painting like a second layer. The painterly sophistication Blom displays here so elegantly is closely associated with Goethes statement: I call architecture frozen music.

In a way, Kenneth Blom releases an energetic field at those moments, drawing energy from the thin line between seeing and emotion. It is compelling to use the analogy of Haute Cuisine in regards to his paintings. The most thorough analysis will never completely decode Bloms images. One finds occasional elements and effects to define and name, like the scent of anise, cardamom or lemon grass rising from a plate. But that is only the fragile effect of a recipe he doesnt disclose.

One is almost tempted to see the paintings as the visible record of a heroic intellectual game in which the painter functions simultaneously as director, psychologist, architect and stylist. There is a tremendous cinematic quality, reminiscent at times to subtle science fiction, where past, future and present are seamlessly merged.

The miraculous element about these paintings, however, lies in their noticeable connection to that very specific nordic light Edvard Munch depicted with such oscillating intensity. We can find an echo of that cold sun in Bloms paintings that Munchs deeply melancholic landscapes captured during the teens of the 20th century. Mysteriously, light and warmth never manage to find each other in that sun. This melancholy - a driving force of the great paintings of Scandinavia - is raised to a new level of energy. Its light illuminates the paintings, simultaneously creating a coldness that settles like a morning frost over the human psyche.

The painters fascination with the comedie humaine of our time opens a door for the viewers, bringing them face to face with their own demons. His paintings reflect a breathless world, a world already working on the abolition of death where the end has been replaced by seriality.

Finally, the viewer is abandoned by Blom to face the ultimate question resulting from these disciplined and imaginative paintings alone in meditative contemplation: Where do I wish to arrive?